I’ve been addicted to Bakery Story 2 for the last week. My only trouble with this game is that I think it wants to be played much slower than I want to play it. I hope that makes sense. What I mean is that I like to barrel through games in long sittings. I like to feel like I’m progressing at a normal pace to the hours I put in.

For one, you can’t make money as quickly as you want to.It doesn’t matter how many goods you bake, how much money you make is time-dependent. With a full display of baked goods and enough seating that no customer is turned away, you can generate around 20,000 gold a night while you’re sleeping. That may seem like a lot, but you’ll notice early how fast the money goes. Recipes cost thousands to learn. Expansions are tens of thousands. And new equipment, I just purchased a French Stove for 60,000 gold. But weirdly enough, money isn’t the biggest concern. 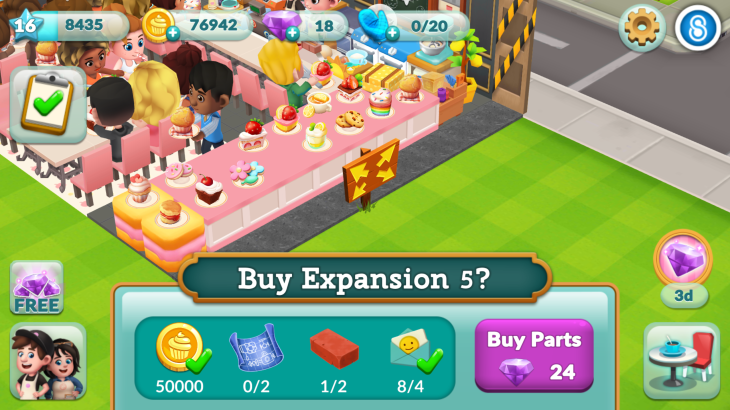 To do anything – expand the bakery, expand inventories, purchase necessary items, increase your inventory space, and even learn some recipes – all requires amounts of very specific items. There’s two different types of items and each has their own method of obtaining them.

These are the easiest item to obtain. Look for Liam to appear in your shop. When he sits down to eat, a thank you note will appear over his head. It appears to stay until the note is clicked on. However, even though he always has a thank you note above his head, sometimes he will drop coins instead of the note. That was frustrating to me early on when I needed one more note, and he dropped coins 3 times in a row.

To-Go Orders start at around level 7, if I remember correctly. You get three sets of orders to fill. If two orders are both asking for the same item, you only need to make one of that item for it to count toward both orders. That’s awesome. Once any order is complete, you press the deliver button for your prize. After that, a timer of 4 hours starts for the next order. Each order functions independently of the others, and you don’t need to complete all three at once to trigger new orders.

This is where you get your main items for expanding the bakery, inventory, and vendor shops. These items are bricks, jars, shelves, shopping baskets, blueprints, and coupons.

At level 16, I have 3 shops that need expanding, because the wait for milk, cherries, and coffee is killing me. The cost of these upgrades is various quantities of shopping baskets, coupons, and thank you notes. My bakery is also bursting at the seams, and I’ve had to stack stoves and counters in front of each other in walkway areas. I’ve also had the quest to expand my shop for several levels now.

While yes, these items for expansion come from the To-GO orders, they appear to be random. The To-Go Orders can also generate coins, gems, and Quick Serves as prizes as well. So while I’m sitting here, hurting for blueprints and shopping baskets, I’ve received coins, gems, and Quick Serves more often than expansion items. This makes me crankier than a cat at the vet.

3. Keys from the Baker’s Club

Not the cheese, the keys! The Baker’s Club unlocks at level 14. Once the box is repaired, a 6-panel board will appear with orders. Unlike the To-Go Orders, there’s a time limit. I’m not sure how long, but the highest time I’ve seen is 17-18 hours.

Once the orders are filled, you receive a mystery box with a key. At least, so far I’ve only received one at a time. Like the To-Go Orders, there is a 4-hour timer between the Baker’s Club Specials board.

When I hit level 15, a new recipe unlocked for me to learn: Gourmet Espresso Cheesecake. I noticed it contained two ingredients that are not available in any of my vendor shops. Turns out, it takes a silver key to purchase a weird stack of suitcases called the Secret Gourmet Goods. Once you have that, it takes bronze keys and 30 seconds to generate those needed goods. Then to learn the recipe, it takes another silver key.

So far, I’ve earned 3 bronze keys and 2 silver keys. I haven’t figured out yet if these key drops are random and if you only get 1 per board redemption. But at this point, the key generations are so slow, especially as I level and new key-necessary recipes are unlocking.

And today I learned that a To-Go Order can contain a baked good that you have available to you based on level and appliance, regardless of whether or not it has been learned yet. That’s the straw that set off this rant as the rest of the item gathering issues built up.

Perhaps this is a ploy to get you to spend money on gems, but I don’t love this game enough to do that. What I’m saying is that, if the game requires more appliances and more recipes, there needs to be a better way to expand than relying on random chance.