Word Cookies is a mobile application word game by Bitmango and can be downloaded on both the Google Play store and iTunes.

A year ago, I got a new phone and switched from an iPhone to a Samsung. On my iPhone, I had the Pogo games app and played Word Whomp every night. I did not like the Google version, so I scoured the Play store for a new word game. Word Cookies stood out to me with its high rating and cute art style. 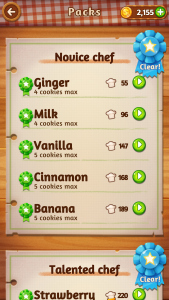 The game is divided into ranks from Home Baker to Great Chef. Within each rank are various packs all named after baking ingredients. As the game progresses, the packs increase in difficulty. Within each pack are 20 levels of individual word puzzles. Special levels can also appear in addition to the 20 levels. The Special Level adds an additional letter to an existing level and more word blanks appear. Word blanks are arranged alphabetically within the same word counts.

With each successful level completed, the game rewards you with coins. These coins are used for hints to help complete the blanks. Additional coins can be purchased with real money. If you are decent at word games, you won’t need to spend any real money on coins.

This is the only game I have downloaded and continually play on a regular basis. Most mobile app games keep my attention span for a few weeks and I’m onto the next. The art style is sharp and well-rendered. The game is simple and easy to navigate. Hours after you put Word Cookies down, you’ll be humming the background music.

I love the themes, but I hope in one of their sooner updates, they add more non-holiday frosted themes. I’m not keen on playing with the unfrosted batch. Frosting makes everything better.

This game does not include every possible word combination available in the word blanks. After several months of playing this game, Bitmango added a cookie jar feature. Thank you! Solving words that are not in the puzzle will add a cookie to Jack’s cookie jar. Once the threshold is met, you are rewarded with additional coins. At my current point in the game, the jar appears to cap out at 90 words. I’m curious if the cap increases with rank.