Castle Cats, by PocApp Studios, is a free app game that focuses on quests queuing and cat collection. I started playing Castle cats this past summer, stopped for awhile, and came back at the end of December. In that 5-month hiatus, Pocapp made huge quality of life improvements to the game. I am presently level 27 with 48/128 cats collected.

The game centers around an over-arching story. Your starting cats Conan (who I renamed Cohhnan. Fight me.), Catniss, and Francis start their own cat guild with your character. The evil Pugmancer got his paws on an amulet that turns cats into dogs.

There are two main components to this game, the first of which is a cat collect-a-thon. In your guild, you job is to recruit as many cat warriors as you can. A book at the top of the screen shows your full collection. The cats are broken up into three types: common/green, rare/blue, and mythic/orange. Cats can be obtained by purchasing boxes with coins or gems, rewarded from the daily calendar prizes, or created with the Alchemy station.

The leveling up rank order is as follows:

The second component is the quest system. If you’ve ever played World of Warcraft and are familiar with the follower system from Warlords of Draenor and Legion, the quest system is exactly the same. Quests will appear on your adventure board with completion times, materials needed, and quest rewards. Based on your cats’ levels and abilities, the chance of completion can vary. When leveled, cats have special traits such as additional gold reward or higher chances of embers as rewards. Quests can be completed at a faster rate by entering a battle while the quest is in progress.

During events, as seen above, an additional story line quest is added. You can also collect theme material rewards from all other quests to create event-related cats at the Alchemy Lab. 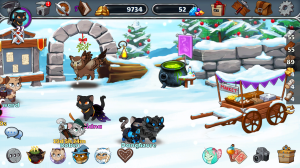 My biggest piece of advice is to get yourself familiar with and don’t be afraid to use both the Market and the Alchemy station. They’re helpful for casual players and a necessity for hardcore players. The Alchemy Station allows players to craft useful items for battle that can do everything from shorten quest times to reducing materials needed for quests. Knowing how and when to use the Market is pivotal in leveling up your material generators and your guild. The higher their levels, the more you can collect at a time and the more cats you can have in battle at a time. 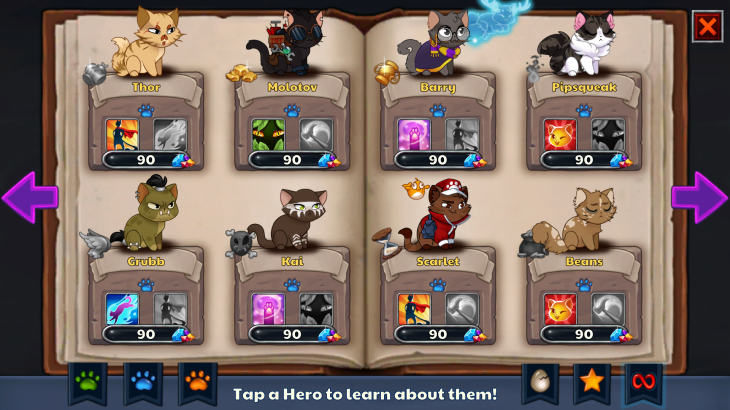 There are a lot of easter eggs. Most of the cats are designed after famous nerdy and pop-cuture icons. For instance, there’s cats based on Pokemon’s main trainer Ash, Harry Potter, Full Metal Alchemist’s Edward Elric, Aang from Avatar the Last Airbender, Cthulu, and even Steve Jobs.

Castle Cats is a simple, addicting game for completionists. The game moves at the players pace. Casual players can log in once a day and queue their quests and collect rewards. More hardcore gamers will enjoy the grind collecting embers and expanding/leveling their growing cat collection.