The game story is broken down into the same chapters, but different events occur depending on who you select to show up. You can choose from Jeremy, Sean, or Walter. You do not need to pick the same person each time, but it helps with accumulating charm points.

With each correct conversation response, you earn points towards your charm. Purchasing a higher level outfit bolsters your charm points. There are two undercover events and one festival event. The events are unskippable so you will need to purchase at least one undercover disguise (15,000 gold) for yourself and one costume (10,000 gold) for your significant other in order to complete a single storyline.

There’s a Free Charging Station where you can earn up to 1,500 a day by watching ads. You can also see what coins you can earn by installing other game apps. This is a good way to bolster your gold without paying, but it’s time-consuming.

Important Note: If you intend to complete the game, you will need to pay a minimum of $10. Walter’s ending is impossible to unlock without the Premium Dress set. You can’t view the real ending unless all other endings are complete. If that’s a deal breaker, then this is as far as you need to go in the review.

Undercover Event 1 – Weekend Investigation
In the first undercover event, you don’t need a costume. At some point in the story, you will be prompted to purchase an item (2,000 gold) for the other person. Doing so rewards charm points and unlocks a sweet image. 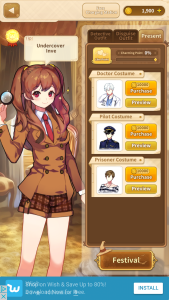 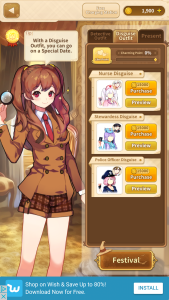 Festival
The masquerade festival requires a costume purchase for your significant other. Even though it’s referred to as a special event, it’s not optional. You can only see the event of the person who has a costume.

Undercover Event 2
The second undercover event requires a purchased disguise for 15,000 gold. You can only complete the undercover event for the person who correlates to the costume you purchased. Like the festival, it’s mandatory. Completing the event will reward more charm points and a special image.

It takes at least 25,000 gold to finish a full storyline. Often in otome games, purchased content is bonus content. In this game, what comes off as bonus stories are actually gated content in disguise. Becuase other than a daily reward of 300 gold, there’s no other way to reach the amount you need without spending way too much time in the Free Charging Station or purchasing the gold with real money. I’m not a fan. I wish there was a story-related way to earn the gold for free. 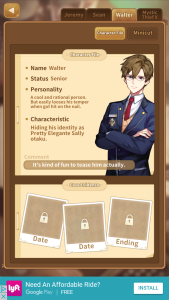 Walter
Also known as the Ice Prince, he is the cold-hearted Senior class president. He doesn’t like to be called out on his mistakes/weaknesses and will lose his temper. He’s also secretly an Otaku, infatuated with Pretty Elegante Sally from a popular anime. His family owns the police station where his older brother is a cop.

His character is very reminiscent of Kyoya Ootori from Ouran Highschool Host Club. If you’re a fan of him, you’ll like Walter, too.

Unless you purchase the +100 charm Premium Dress set, you will not be able to unlock his story. Even with everything else done at 100%, the purchased bonus magnifying glass, and the Level 4 Detective Outfit, you will max out at 92%. I couldn’t unlock Walter’s happy ending because of that.

Jeremy
Jeremy’s family owns the local hospital, and they are loaded. He has no qualms with showing off his ability to afford whatever he wants at his whim. Jeremy’s mannerisms come off as childish, often whining and dragging on words like “but whyyyyyy” and “that’s sooooo meannnnnnnn.” I found it obnoxious from the first scene.

Jeremy’s also sick, but the story never reveals what his illness is. That lack of detail detracts from his character arc. Actually, speaking of character arc, he has none. Pretty eyes and the sympathy he draws from being sick are his only redeeming qualities. Otherwise, he’s obsessive with the main character through the whole storyline. And by obsessive, I mean, you could flag him for sexual harassment in nearly every encounter. He’s clingy, jealous of any other man you talk to, and constantly berating the main character with confessions of love. It’s the kind of behavior that’s only overlooked if the man is good looking and rich. I’m not a fan.

It appears Jeremy is the intended first investigation. I didn’t have the gold to buy the costumes for Jeremy’s special encounters, so I used Walter’s to skip past them. Even skipping the special scenes, I was still able to unlock his happy ending.

If you like Tamaki from Ouran Highschool Host Club, Jeremy is similar but less charming and more overbearing. Where Tamaki is protective of Haruhi, Jeremy is possessive of Miss Detective.

Sean
“The Prince of Dark Devils” is your stereotypical lonely bad boy. He comes off as genuinely insane and implies he has a split personality he refers to as “the dark dragon.” He speaks with a forced proper 18th-century accent, but when situations turn urgent, his stutter and poor speech comes through.

Despite the insanity that spews from his mouth on a constant basis, he shows a kind heart in pivotal moments. Despite his penchant for darkness, he’s actually a coward.

I particularly like Sean’s story arc. Between a grumpy Walter and an obsessive Jeremy, overcoming Sean’s weird habits is a more believable love story. Unlike Jeremy, you need to purchase the stewardess disguise for yourself and pilot outfit for him in order to unlock his happy ending. On the downside, the mystery behind his eyes is never mentioned even after the happy ending. 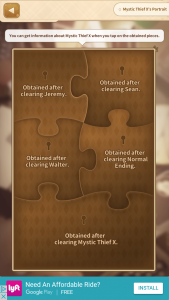 The stories often feel rushed, unlike the slow drawn-out love stories of otome games like Midnight Cinderella. However, there is no daily maximum of stories, and if you had the gold, you could complete the whole game in a single day. The English grammar is quite lacking, often littered with typos and sentence structures that don’t make sense. I don’t feel it detracts from the stories, but it works against the immersion.

When loading up Miss Detective, the game prompts you to allow the app to have access to your phone, camera, and contacts. It says you can’t play the game unless you accept all of them, but I denied them and had no trouble.

I originally picked this game because the art is exceptionally well done. The music is bright and catchy. The individual character arcs are sweet, and the over-arching story (the true love story with Mystery Thief X) is the best part. Miss Detective Undercover is worth a play, but keep in mind there may be a few frustrations. Complete what you can and watch the rest on YouTube.