I knew when Nintendo announced Mario cereal’s debut in early December that finding a box before Christmas was the stuff of daydreams. I checked every local grocery store once a week to no avail. I did a stint in grocery retail in my early years, and I knew new products didn’t always just appear on shelves the day they came out. Grocery stores have mods that need to be reset and older product to sell through. I watched several Kellogg character cereals like Moana sit on clearance for almost a month, hoping, praying, it’d be replaced by Mario.

What you may not know about me is that I am the Queen of Cereal Treats. If a cereal exists, I will coat it in butter and marshmallow. It’s a habit that started several years ago when I was diagnosed with iron deficiency anemia more than twice in a year. My doctor suggested iron-fortified cereals amongst other things. Unlike spinach, cereal doesn’t wilt in 3 days. I don’t particularly care for milk, so I made a batch of Rice Chex treats.

Since then, I’ve treated a multitude of cereals. Fruity Pebbles and Cocoa Krispies are favorites for sure. I also find cereals with marshmallows already in them to be especially fun to eat. When I saw Mario cereal, I knew it had a marshmallow-coated destiny.

A tip on Twitter led me to a local grocery chain, and I bought three boxes with a happy dance.

I was a bit disappointed with the look of the cereal once I got it open. The star cereal pieces are large and resemble starfish more than anything. Hey 90s kids, remember Sprinkle Spangles? I wish it was more that style and size. The marshmallows, which are supposed to be hats, 1-up mushrooms, and question blocks, look more like amorphous colored blobs with white patches. It was almost like Kellogg/Nintendo said “close enough. It has Mario on it, we’ll sell millions anyway.”

I fake, fruity scent accosted me upon opening the box. Thankfully, it smells worse than it actually tastes. The fruit flavor is faint, somewhat noticeable in the dry pieces, but in milk or otherwise, it’s nonexistent.

Lots of reviews I’ve read before said: “it tastes like Lucky Charms.” Nah. Lucky Charms is better. It’s basically like any other marshmallow cereal you’ve ever had. Especially if you’ve had other Kellogg’s gimmicky kids’ cereals.

For Cereal Treats, I use the following recipe:

The box contained slightly more than the 6-cups I use for the recipe, which is not a lot of cereal for the $4 a box. It does cut down on waste if you have no other use for the cereal anyway. I did just use the whole box for this, and as you can see from the picture, it wasn’t too much. 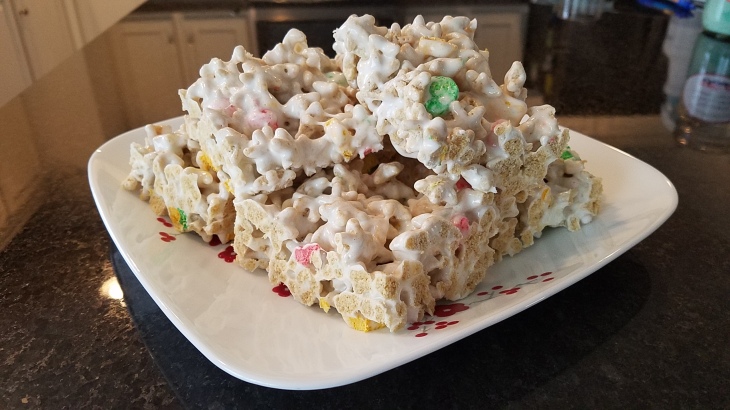 In fact, even with the increased cereal, the ratio of marshmallow was overkill. In 100% of cereal treats I’ve made in my life, too much marshmallow was never a problem. I think the trouble came from the size of the cereal pieces, which I mentioned above are weirdly huge.

The cereal pieces don’t stick together well in a nice, compact formation, and the extra marshmallow obscures the colorful pieces. It cuts well, but they are less treat bricks and more shapeless blocks. It only looks good in the photo, because I spent too much time making sure it did.

I will say that I finished the whole pan. But it was literally a marshmallow goo fest. I still have two unopened boxes, and I will adjust my recipe for the next batch.

My 2-year old nephew thought these were the best things since Skittles, and when his mom asked him his pizza topping of choice for dinner, he held up his treat and said “This!” So kids will love these for sure.

A few weeks after finding the elusive Mario cereal, it’s appeared in every store I’ve looked for it in the past. If you’re inclined to make these, you won’t need to fork over $12 on eBay.