In this second installment of Perlers For Beginners, I will cover picking what to make, how to tweak your creation, and preparing it for ironing. Ironing, troubleshooting, and selling your creations will be covered in later posts. If you’re starting here, be sure to check out Part 1: Materials where I cover the tools you’ll need.

First things first, you need to know what you want to create. For this example, I’m using Black Panther. While preparing for an upcoming craft fair, I wanted to do a series of Marvel character heads. (I’ll cover the why of what to pick for craft fairs at a later date.)

Start by visiting a search engine. Any number of Perler crafters before you have probably tinkered with a version of what you want to create. If it doesn’t exist, find something of a similar build. For Black Panther, I could search for cat perlers if nothing came up.

I chose this one by hehehe95. The head is a good size, and I like the proportions.

Start by beading the outline. Like putting a puzzle together, it’s easiest to have a literal frame for reference. It also helps you catch an error in case you missed a line or ended up a perler bead short on one string.

After that, place your lesser colors. In this case, it’s white and light gray. This allows you to fill in the majority color (black) around the intricate pieces. You can also tweak the details at this point without having to adjust more beads than needed.

This is where I adjust the template to my tastes. I want the gray to go all the way to the edges and to make the ears smaller.

Don’t let this photo fool you. I spent half an hour trying to get that one ear correct. Move the beads around and see what works. Snap a quick photo with your phone’s camera in case you want to return to a tweak you made previously. Remember, there’s no Ctrl+Z in real life. I also adjusted the eyes to round off on the ends and moved the stripes from touching them.

Now that the details are in place, fill it in. It can get pretty monotonous depending on how big your piece is. I often have a movie or a Let’s Play going while I work.

There’s too much black in the near-final version. I added another set of stripes and gray beads around the bottom to mimic his claw collar. Once you’ve finished, take a step back and look at it from a distance. Take a picture and send it to a friend. Is the character recognizable after your adjustments? If the answer is yes, you’re ready for tape. 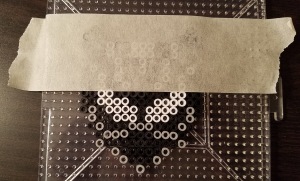 Pull a strip of tape a few inches wider than your art. Give yourself a little space at the top and place the tape down quickly and all at once. If you mess up putting the tape down cleanly, you could end up flipping beads sideways, or worse, lifting half your piece out of place. It’s not pretty. 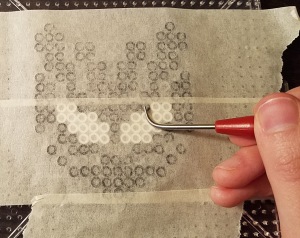 Repeat with tape strips overlapping a few millimeters. If your overlaps are too thin, you run the risk of splitting your art on lift-off. Too thick, and you’re going to have to work harder in the “poke” phase. The wider the masking tape you have, the better. Fewer seams mean less muscle later.

Once your tape is covering your art completely, use your loom hook to adhere the tape to the beads. You don’t have to be super perfect, just a quick rub over until the bead colors show up.

Use your loom hook to gently pull the tape up on all sides. Pull the tape straight up. Don’t worry if a bead or two stays on the plate. It’s an easy fix. Get your money’s worth on that loom hook and use it to place any missing beads or fix beads that may have flipped in the taping process. Fold the tape edges over, starting at the top. If your taped piece slides into anything, it won’t get stuck.

Almost there. It seems like a lot of steps and a lot of hassle, but once you have the method down, it’s not a big deal. “But why go through all this?” You might be asking. “Can’t you just iron it on the board?” Yes, you can, if you don’t mind replacing warped boards every few months.

The last step is the most tedious. Remember that movie I had you turn on earlier? I hope it’s still going. You’re supposed to use your loom hook for this part, but my husband and I came up with a better idea. If you have a few extra DS styluses lying about like the gamer you are, tape them together with a few pieces of cardboard and you’ve got yourself a 3x faster tool.

Once the poking is done, give the tape another rub with your loom hook. Concentrate especially on the edge beads. Poking holes in the tape releases trapped air in the ironing process. Trapped air + ironing equals holey art.

Double check your work that there are no missing holes. Sometimes it helps to hold it up to a light. After I took this photo on the left, I noticed I missed one? Do you see it? Hint: it’s near the bottom. (Edit after ironing: I missed two, actually.)

Poking all these holes seems SO tedious. Why can’t I leave the taped art on the pegboard and lay another pegboard on top? You can. I tried taking that short-cut while churning out batches of perlers for a craft fair. It’s like trying to use an apple slicer. You have to press in a circular motion around the edges before you can get it to sink down in the center. I chipped a pegboard, it got coated in a sticky residue from the tape, and I narrowly did permanent damage to my wrists. 10/10 wouldn’t recommend.

That’s it. You’re ready to iron. Head on over to Part 3: Ironing (when it finally goes up).