The Arcana is an LGBT-friendly visual novel and romance game by Nix Hydra. Described as a “Mystic Romance,” the game has heavy themes in magic, tarot, and occult. It also has a strong Fruits Basket meets Edgar Allan Poe’s “The Masque of the Red Death” feel. The characters are based on the Major Arcana, and a large part of the backstory involves a yearly masquerade ball – and also a disaster that struck Vesuvia, the Red Plague.

Right from the first screen, the art style is breath-taking. The art direction is cohesive, beautifully drawn, and the color pallets used throughout the game are magical. Purples, oranges, pinks, and golds with blues and teals evoke the mysticism throughout. The music is serene with the sounds of a babbling brook running under the sweet melody.

A unique feature that isn’t found in many otome/ romance games is gender identity settings. Before the story begins, you’re prompted with the screen on the left. You can choose your name and pronouns to customize the story for you.

Besides picking your pronouns, you can pursue any of the available characters regardless of gender. In fact, Nix Hydra confirmed at least one character is non-binary and three have had queer relationships in the past.

Your player character is a tarot-deck-wielding prodigy magician employed at Asra’s magic shop. Waking up at the shop is your first memory, and you don’t recall anything prior to that.

While Asra’s on another secret journey, Nadia, the Countess of Vesuvia, summons you to her palace. She wants to host a masquerade party, a spectacle that hasn’t taken place since her husband’s murder during the last one three years ago. At the event, she wants a very public execution of the culprit, and she wants you to help catch him.

Though the story paths aren’t complete, the plot asks more questions than it answers. Soon you’ll be trying to piece together not only your own memories and abilities, but what really happened that fateful night three years ago?

Currently, three paths are available but none of them are complete.

Asra is your magic teacher and owner of a mystical shop in the woods. They frequently disappear on secret journies and appear to know more than they’re telling you. Yes, Asra is non-binary.

Nadia is the Countess of Vesuvia. Though plagued with visions and headaches, she will stop at nothing to bring justice for her husband’s murder.

Julian is a doctor who worked tirelessly during the times of the Red Plague. He has a flair for the theater.

*Muriel is a mysterious stranger who brings with him clinking chains and the scent of myrrh.

*Portia is Nadia’s trusted handmaiden. Full of energy and wits, she’s your guide at the palace.

*Lucio is better left with no description, otherwise it might ruin the story. He’s not nice.

The main game is played in visual novel format. Each chapter is broken up into three sections, and each section takes one key to read. Once used, a key respawns after 8 hours. Doing the math, that’s one chapter a day. Standard stuff. If you want to reread a section, it requires another key. Each chapter can also be purchased outright with 500 tokens ($10) to reread as you please.

The chapters themselves must be read in order, but you can jump from one suitor to another. You are never stuck on one path. If you get bored with Asra’s path, you can start reading Julian’s or Nadia’s path at any time.

During the chapters, you’ll encounter options for your own actions or dialogue. What you choose will alter your interaction or conversation with the person, but it has no effect on the direction of the overall chapter.

Some prompts force you to make a quick decision with a timer bar at the bottom. These decisions appear to make or break the relationship with that character, but without all the chapters available, it’s hard to tell what bearing they have on the full story.

At some points in the chapters, you’ll come across decision prompts with a coin-locked option. Spend that number of tokens and you can see a romantic event with your suitor. Again, whether or not you choose this option changes nothing in the overall story or direction of the chapter. 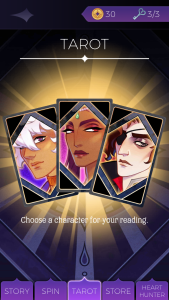 When you first play the game, you get a free general life tarot reading. The reading is a 3-card glimpse into the past, present, and future. Below is mine as an example of the cards you can get. If you log into the game and click the Tarot tab each day for seven days, you’ll receive another free reading. You have to click the Tarot tab each day. If you miss one, the counter resets to zero. You also earn +5 coins each time.

You can spend coins to get tarot readings as often as you like. There are three characters who will read for you depending on a specific topic: Asra (love), Nadia (success), and Julian (happiness). Any character can give you a general 3-card reading for 100 tokens ($2). A character’s specific reading costs 250 ($5).

The Wheel of Fate

Spin the Wheel of Fate once a day for a chance at tokens and trinkets. When you collect a full set of trinkets or meet other denoted criteria, it unlocks special content.

Available to play three times a day, Heart Hunter is a mini-game of chance and strategy. Each turn, a random die is assigned to each NPC, and they move to various spaces accordingly. On your turn, you tap for a chance to move 1, 2, or 3 spaces. When you land on a space with an NPC, a short interaction will play, and you will earn a heart. Landing on Faust (the snake) grants you a random heart or none at all.

After three turns, the gameboard switches to nighttime. Each NPC interaction at night allows you to take a heart or risk a spin for double or nothing. If you score four hearts with an NPC, the game is over, and you win a postcard from that character.

Power-ups can be purchased coins in increments of 1 or 5. The green heart arrow gives you a +1 to your movement roll while the blue arrow grants +2. For a guaranteed heart, the red and gold heart arrow will summon a character directly to your space. You can also purchase additional turns once the six turns are up.

It’s hard to judge the complete story and its characters without a finished narrative, but what I have read so far is intriguing. Each revelation is shrouded by more mystery. Like classic Japanese otome games, there are mini-games to tide you over until more content is unlocked. These mini-games (tarot, heart hunters, and wheel of fate) tie well into the game’s themes and are enjoyable in their own merit. That said, the token-gated story content is frequent. Unless you’re willing to shell out $3-5 a chapter, the major romance elements of the game are lost.