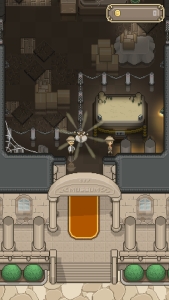 Tap! Dig! My Museum! is an idle/sim game by Oridio. You decide to open your own museum in an abandoned building. Visit dig sites, expand your building, and discover all the dinosaurs buried beneath the earth. I completed everything prior to the September 1 update, and may update this review once I’ve played it.

At its core, My Museum is a digging game with a display mechanic to show off what you’ve unearthed. Build display stands, click the stand, and pick a dig site for it. All new bones will be displayed as you collect them until the full dinosaur is revealed.

At the dig site, click to break down dirt and stone to reveal dinosaur bones. Stones take more effort to break than dirt, and some stones take more than others. Only two bones can be found per site at a time, and one is often a new bone. You can also find coins and gems. A pickax option allows you to toggle between 1 or 2 swings at a time, and you can dig until your energy bar runs out. When your energy dips into the red, you have the option to watch an ad for an additional 10 swings. Once you’ve found 2 bones, the site event ends.

Back at the museum, the displays have progress bars, and the name of the dinosaur fills in the further you progress.

Customers will walk around your museum and leave coins depending how much they enjoy your displays. Swipe your finger around the screen to collect them. Completed skeletons reward more coins than unfinished or empty displays.

You can also swipe down to the street and click on passersby to get them to come into the museum.

There are four type of dig sites: red, silver, gold, and platinum. Red dig sites house smaller dinosaurs, silver, medium sized ones, and gold, large. The platinum site is the last dig of the game. The display stands predetermine which size dinosaur you can place, and you can’t pick which size you want… yet.

On some dig sites, you can dig up an additional bone fragment that gets put into a red case. These artifacts combine with ones from other sites to create a piece of another skeleton. Once the pice is completed, it unlocks a new digsite for that dinosaur.

You’ll start the game with one of each free power up, but additional ones can be bought with gems. On the store, you can also watch an ad daily to spin a wheel, earning a free item.

Once you finish building all displays in a room, you unlock a roomba coin collector for the previous room. These can be upgraded twice for speed.

By the sixth room, you’ll be able to switch out the stands. Want 1 gold and 6 red? Or all 4 silver? Display your collections your way.

At first, I found the game a little dull… button mashing and watching ads to bring in buses and get extra swings at the sites. But by the time I finished the third room, I was addicted. I usually play a game until I get as far as I enjoy it, write my review, and delete it. I completed this one (up until the September 1 update) and left it on my phone to come back to.

As of now (pre 1.5.0), you can’t display all 48 dinosaurs, and there are no more rooms to unlock once you’ve opened the first room on the third floor. The update recently dropped, and the patch notes say more rooms have been added. I will add to this post once I finish playing the update.

I wish you could sell the extra bones without selling the whole skeleton, but there does not appear to be a way to do that. While watching ads help, you certainly don’t need to do so to play this game.

I’m excited to play the update, and according to Oridio’s twitter, there is another update in the works.